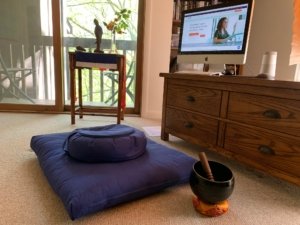 In April I taught my first online retreat and, to my surprise, it turned out much better than I expected.

The non profit I founded, One Dharma Nashville, holds an annual spring residential just outside of Nashville at Bethany Hills, a beautiful sport that is surrounded by nature. I knew by early March that the odds of this retreat happening were slim because of the virus. I began contemplating switching to an online offering to replace it, but felt hesitant, doubting the efficacy of meeting together on zoom while practicing at home.

Once we officially cancelled the in person retreat, I saw two choices: practice together online or skip the spring retreat entirely. Reluctantly, I chose the former. I have to admit initially I wasn’t looking forward to teaching a retreat online and only went ahead to accommodate those in our sangha who had voiced support for this format. Slowly as we got closer to the start date, I warmed up to the idea and even looked forward to it.

But I wondered, would people actually practice outside of our zoom meeting times? Could folks navigate home life, spouses, pets, maybe even children, wile meditating multiple times a day? Some decided they couldn’t, especially those with multiple kids at home or difficult work challenges. But many in our sangha and beyond decided it was worth a try. Everyone who attended was an online retreat beginner even though most were experienced retreat practitioners.

Observing full silence while also sharing home space with others is almost impossible, so most found a practical “middle way,” observing silence part of the time but still connecting and communicating with those at home. People living alone set up their time as a traditional silent meditation retreat.

I was surprised at how connected we felt meditating together multiple times a day. Having a schedule and sticking to it, even though it wasn’t as intensive as an in person retreats, allowed us to feel connected in the practice and in the dharma in a way that sitting alone doesn’t. Even when practicing during the offline times during the weekend, many people reported feeling a sense of connection to the sangha.

Retreating at home in this way isn’t as conducive to experiencing the deep Samadhi (meditative absorption) that many meditators encounter on residential retreat. Yet other benefits emerged that are equally, or even in some cases, more valuable. Many of our retreat participants reported how the barriers of retreat and home life dissolved. They were able to clearly observe conditioned patterns that show up in daily life and intervene, with lasting effects. Often on residential retreats, reentry into everyday life feels challenging. But in this format, the line between the two was so subtle that reentry felt natural.

I now believe home retreat is a valuable development in our practice that allows the barriers between retreat practice and home life to fall away. As we bring our retreat practice more deeply into our everyday lives, the penetrating wisdom of the dharma sheds a light on parts of ourselves, and the way we function day to day, that may be obscured otherwise. It opens capacity to choose, with compassion and wisdom, a more responsive and aware relationship with ourselves and others.

I’m still a firm believer in retreating together in nature and look forward to the time when we can do this again safely. But for now, and even once quarantine ends, I believe online home practice is here to stay. Both formats have value in differing ways. And I’m personally on board for more, both as a practitioner and a teacher. In fact, I have one coming up this weekend. See you on the other side!